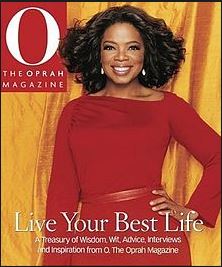 confident, Oprah Winfrey. The success Oprah enjoys today has come from many years of hard work, dedication and overcoming adversity. According to wikipedia “Winfrey was born into poverty in rural Mississippi to a teenage single mother and later raised in an inner-city Milwaukee neighborhood. She experienced considerable hardship during her childhood, saying she was raped at age nine and became pregnant at 14; her son died in infancy”. After overcoming these very painful personally challenges Oprah is now “ranked the richest African-American of the 20th century, the greatest black philanthropist in American history, and was for a time the world’s only black billionaire. She is also, according to some assessments, the most influential woman in the world.”

Who better to inspire us to live our best life, here are Oprah’s top tips:

If you are worried about a situation, ask yourself:

What’s the worst thing that can happen?

Is it really so bad?  It usually isn’t.

Seek out people who make you feel good, relaxed and resourceful.

Read a book that is inspiring.

Refuse to read bad news during a negative period.

Write a list of all the things which are good in your life, then compare it with the ‘problem’. See how insignificant the problem seems.

Watch a film that helps you get in a positive state.

If you have kids, play games with them.

If you don’t have kids, pretend your one!

Go somewhere, which inspires you.

Ask someone for a hug.

Read a funny story before you go to bed.